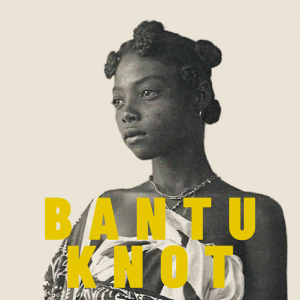 It is said that the Zulu people in Southern Africa were the ones that popularized the Bantu knots also known as Zulu knot. This hairstyle can be traced back to hundreds of years ago to the Zulu tribes of Africa.

Bantu speaking people
Bantu languages make up the largest language group in East Africa in terms of number of speakers. Bantu is a sub-sub group of the Niger-Congo-family. Languages of that family are spoken all over west, central, down eastern and south Africa. One of these languages is Zulu that has around 12 million speakers.

In Africa there are many tribes and each tribe has its own culture and traditions related to hair braiding. The unique braid patterns or hairstyles indicate a person’s: community, age, marital status, social position and religion.

The hairstyle
The bantu knot can be achieved by twisting sections of hair into a knot. It’s recommend to have at least medium/long hair, however you can also use some hair extensions to achieve this style.

Down below we shared for each hairtype a helpful tutorial video about how to create the Bantu knot style yourself!


✔Pros
-it’s a 2 in 1 hairstyle, you can first hold the bantu knots in for a few days and after that you can take them out and enjoy your beautiful curls!

The controversy around the style
For many African people this Bantu knot means more than just only being a hairstyle. It also gives them that African proud of embracing a hairstyle that their ancestors have been doing for so many years.

If you have been encouraged by this post to give the Bantu knot a try. You should know that this hairstyle has a deeper meaning for many people with African roots. And therefore it has created some controversy cases were western people would named them wrong or wear them out in public.

That’s why it’s recommended to at least know where you got the style from and what the right name is of the style. However this does not mean that you win everyone’s heart but enough people will see you had good intentions of appreciating the cultural background behind it.

What is the reason for all the controversy?
This all has simply to do with the long sad history of what type of hair was described as good and what as unprofessional. Unfortunately till up on this day people with mostly type 4-3 hair are still being told that there natural hair that grows NATURALLY out of their scalp is not good enough.

We believe that to move on from the controversy around certain hairstyles. People with type 4-3 hair and protective styles should feel comfortable embracing their hair without needed to be concerned whether someone will confront them about it.

Sources that we used

Drying your hair with a regular towel can be damaging?